IMDb: 8.0 2019 123 min 700 views
The near future, a time when both hope and hardships drive humanity to look to the stars and beyond. While a mysterious phenomenon menaces to destroy life on planet Earth, astronaut Roy McBride undertakes a mission across the immensity of space and its many perils to uncover the truth about a lost expedition that decades before boldly faced emptiness and ...
DramaScience Fiction

IMDb: 6.7 2008 114 min 580 views
Scientist Bruce Banner scours the planet for an antidote to the unbridled force of rage within him: the Hulk. But when the military masterminds who dream of exploiting his powers force him back to civilization, he finds himself coming face to face with a new, deadly foe.
ActionAdventureScience Fiction 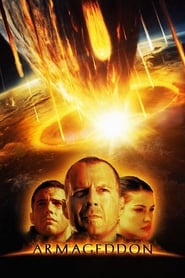 IMDb: 6.7 1998 151 min 700 views
When an asteroid threatens to collide with Earth, NASA honcho Dan Truman determines the only way to stop it is to drill into its surface and detonate a nuclear bomb. This leads him to renowned driller Harry Stamper, who agrees to helm the dangerous space mission provided he can bring along his own hotshot crew. Among them is the cocksure ...
ActionAdventureScience FictionThriller