IMDb: 6.4 2018 110 min 668 views
In 1980s Beirut, Mason Skiles is a former U.S. diplomat who is called back into service to save a colleague from the group that is possibly responsible for his own family's death. Meanwhile, a CIA field agent who is working under cover at the American embassy is tasked with keeping Mason alive and ensuring that the mission is a success.
ActionDramaThriller 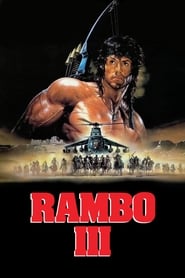 IMDb: 5.8 1988 102 min 624 views
Combat has taken its toll on Rambo, but he's finally begun to find inner peace in a monastery. When Rambo's friend and mentor Col. Trautman asks for his help on a top secret mission to Afghanistan, Rambo declines but must reconsider when Trautman is captured.
ActionAdventureThrillerWar